Timeline of the third arrest of Prof. Imad Barghouthi 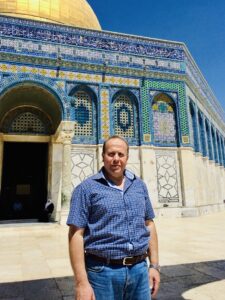 July 16th 2020: on his way home from Al-Quds University, prof. Barghouthi is arrested at a Israeli checkpoint near Anata and detained.

July 25th 2020: a petition for the liberation of prof. Barghouthi is written and signed by a group of concerned academics. At the time of writing, the petition has more than 3000 signatories. See the petition here.

August 2nd 2020: only after three weeks of detention, charges are moved against prof. Barghouthi. The charges concern his social media activity.

August 10th 2020: from prison, prof. Barghouthi writes a letter addressed to scholars worldwide appealing to be released from jail, so he can continue his teaching duties at Al-Quds University. The letter can be found here.

August 26th 2020: an article, detailing the systemic repression faced by Palestinian cultural and scientific figures at the hands of the Israeli military, and discussing prof. Barghouthi’s case as well, is published in +972 magazine.

September 2nd 2020: the judge on prof. Barghouthi’s case grants him the possibility of being released on bail while he awaits trial. However, an Isareli military commander places prof. Barghouthi under Administrative Detention (AD) for a couple of months, overriding the judge’s decision.

September 8th 2020: an article about prof. Barghouthi is published by Middle East Monitor.

September 12th 2020: A second letter by prof. Barghouthi is published. The letter, about his administrative detention, can be found here.

September 22nd 2020: A statement is released by the Committee of Concerned Scientists, condemning the imprisonment of prof. Barghouthi and demanding his release.

October 16th 2020: Scientific American writes about prof Barghouthi in an article about scientists who are imprisoned for political reasons.

November 3rd 2020: a judge orders prof. Barghouthi to be freed from AD on November 8th, a week before scheduled.

November 8th 2020: the AD is again renewed until March 1st, preventing prof. Barghouthi from being released on bail.

January 9th 2021: an appeal moved by prof. Barghouthi’s lawyer against the AD order is rejected.

February 15th 2021: the first session of Imad’s appeal to the Israeli High Court of Justice is postponed.

February 22nd 2021: the first session of Imad’s appeal to the Israeli High Court of Justice takes place. The appeal is rejected on the basis of secret evidence provided by the Shin Bet (the Israeli Security Agency).

March 1st: the AD order against prof. Barghouthi is renewed for a third time, this time until June 17th.

May 31st: Prof. Imad Barghouthi is released from prison and placed under house arrest.